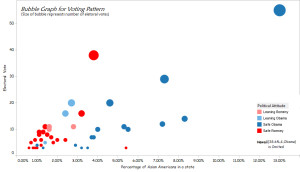 There are less than 40 days left till the election of the next president of the United States.

According to the 2010 decennial census, Asian Americans represent about 5 percent of the U.S. population.  They have been the fastest growing racial group in the nation, increasing by 43 percent from 10.2 million in 2000 to 14.7 million in 2010.  They are expected to vote in record numbers this year.

Asian Americans are present in all 50 states and the District of Columbia, ranging from a low of 0.6 percent in the state of Montana to a high of 38.6 percent in the state of Hawaii.   Their recent voting patterns showed a strong trend: where Asian Americans are present in relatively high percentage in a state, the state tends to vote for the Democratic candidate, and vice versa.  The figure above confirms this pattern.
Based on the most recent CNN electoral map, among 19 states whose Asian American population is at least 2.9% of its state population, 14 are solidly for or leaning towards Obama, accounting for 189 electoral votes.  Among the 18 states with no more than 1.6% Asian Americans in its population, 15 are solidly for or leaning towards Romney, accounting for 99 electoral votes.  Although the number of states is about the same for each candidate, Obama enjoys an advantage in electoral vote count because Asian Americans tend to live in urban areas of states that are large in population.
Seven of the 9 “toss-up” states are in the middle range where Asian Americans make up between 1.7% and 2.8% of the state population.
Based on this observed relationship, Biao Yang, a graduate student in statistics at George Washington University, constructed a multinomial logistic regression model to first predict the chance of a candidate winning the electoral votes of each of the 9 “toss-up” states and then applied the estimated probabilities to run 100,000 computer simulations on who will win the ultimate electoral vote count.
The result: Obama’s chance of winning the November 6 election is estimated to be 78.03%, and Romney 21.84%.  The probabilities do not add up to one because a tie of 269-269 may occur with 0.13% probability.   Biao’s predicted electoral vote count is 284-254 in favor of Obama.
We will find out how good these predictions are on November 7.
Asian Americans can have an important influence on the outcome of the November 6 presidential election.  However, regardless of their preference for political party or candidate, they have to register and vote to make a real difference.

This site uses Akismet to reduce spam. Learn how your comment data is processed.

Theft of Trade Secrets by Chinese Professors for Technology to ChinaOn May 16, 2015, Tianjin University Professor Hao Zhang was arrested upon entry into the U.S. from the People’s Republic of China […]

Protected Rice Seeds to ChinaOn Oct. 26, 2016, in the District of Kansas, Wengui Yan pleaded guilty to one count of making false statements to the FBI while working as a […]

Trade Secrets to South KoreaOn May 1, 2015, Kolon Industries, Inc., a South Korean industrial company, was sentenced in the Eastern District of Virginia to 5 years’ probation and was ordered […]

Theft of Trade Secrets by Chinese Professors for Technology to ChinaOn May 16, 2015, Tianjin University Professor Hao Zhang was arrested upon entry into the U.S. from the People’s Republic [...]

Theft of Valuable Source Code for ChinaOn June 14, 2016, Jiaqiang Xu was charged in the Southern District of New York in a six-count superseding indictment with economic espionage and theft […]